Six of us out in the rain at Broadway today to continue with the installation of the point rodding from the south end  of platform 1.
Two steel plates have been cut to replace the wooden templates that were made a couple of weeks ago. Platform 2 side now has its cranks bolted on in their final positions. 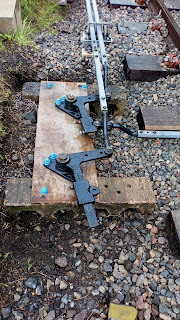 The plate on the other side of the tracks is now fixed to the two concrete blocks, but the whole assembly needs tweaking about with a crowbar to get the alignment and levels correct before the holes are drilled for the cranks. 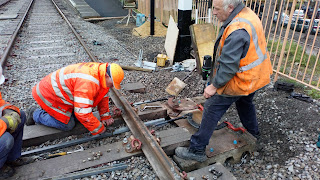 Out with the magnetic drill - this really does make light work of drilling eight  20mm dia holes through half an inch of steel. 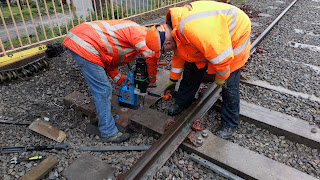 Just a quick aside at this point. The two steel plates that you see here have been cut from one of the larger pieces that was originally covering the culvert (re-built recently) under the track at Bishops Cleeve. So a good bit of re-cycling achieved.

Cranks now lined up, bolted down and waiting to carry on up to the bridge. I climbed up the ladder of the adjacent bracket signal to give a better overall view of the crossing over. You will see that the alignment of the opposing sets of sleepers doesn't give us much to play with but we have ended up with adequate clearances. 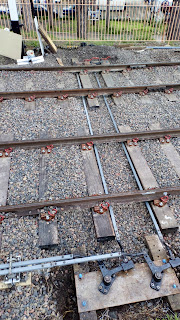 Getting the rodding over the bridge is proving a little more problematical. We are using a modified roller support which is clamped onto the vertical web of the bridge and with one foot down into the ballast which will eventually get a "boot" of concrete when everything is levelled up. 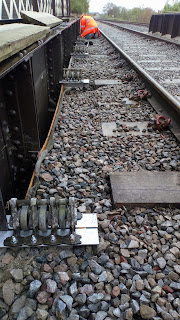 Carl S and Jim P discovered that some carpentry was going to be needed to modify the ballast protection boards to fit round the  additions.
We didn't manage to get the rest of the stools dug in and concreted today , but hopefully we will get over the bridge next week.
Having got this far we have now run out of the fabricated stools for the 3-roller sets, so from the far side of the bridge we will need some serious digging to sink in the far more substantial concrete stools - at least these will not need further concrete. (picture of one of these next week) 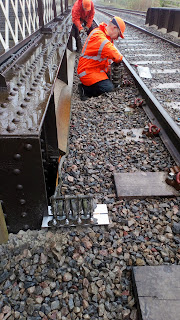 This is where we left it - all getting rather wet. 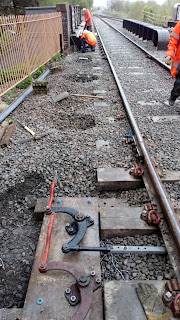 Foremarke Hall , glistening in the rain, was giving us the run-around in between showers : 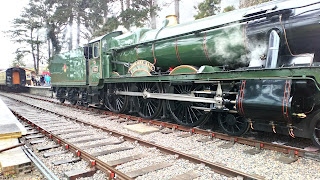 P S Did manage to repair our vandalism to platform 2 ramp. The rodding now sits neatly underneath 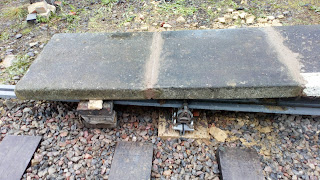