Laying of the Troughs

Plenty still to do to get the re-vamped signalling and electric point motor installed at Winchcombe north end. First of all I was shown the work which has been going on above and below in Winchcombe signal box over the last few days. Neil C has been busy configuring the new control board for the point motor and detection (relays etc) which is attached to the wall in the locking room: 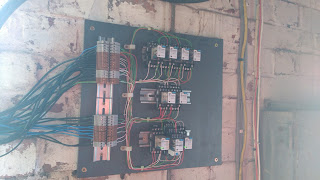 Meanwhile upstairs some of the signal repeater dials have been moved and two additional indicators for the points have been installed (the ones on the right of the shot - one above the other): 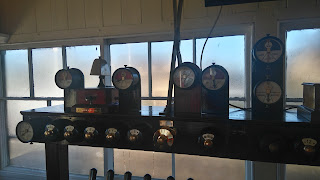 Now to the main event which required a bit more physical effort.  An additional 240volt supply cable is being laid from the signal box up to a lineside cabinet near the re- positioned pointwork. There are now 3 cables of varying section which are going to be housed in concrete troughing from the end of platform 2 up to this cabinet. More about the electrics in a minute, but first a few shots of our labours - a P Way trolley loaded up: 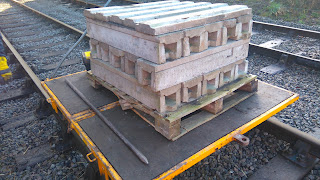 We need approx 100 of these to complete the run. However, to get all 3 cables into some sort of shape    to go into the troughs we first had to "un-bury" the 30 pair cable . This has probably been buried here since 199* ?( anybody know the date?) and proved quite a problem teasing it up, it was buried about a foot deep behind this drainage inspection chamber - we adjourned for lunch once it was freed. Here's Malcolm on the last stretch: 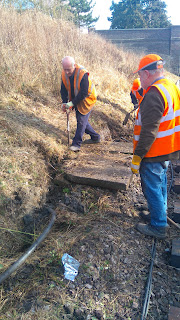 The troughing is being placed on ballast after we have levelled it out and then established a reasonably straight line towards the cabinet. Because the troughing has to be placed in front of the drainage chambers there is a bit of deviation but it still looks fairly tidy. We must have it looking good from the platforms.  Len was following on with cable insertion: 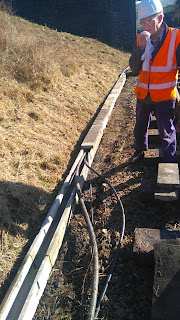 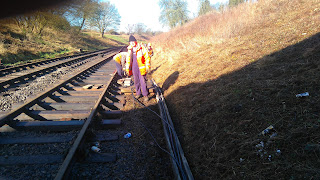 Back to the electrics. 250 v AC  is being supplied to the cabinet from the Signal Box by armoured cable.  The point motor operates on 110v DC so we have to transform and rectify to suit.  Here is the transformer and rectifying unit being installed on the LH side . There is a sea of cable connections here for all the other control systems, signal lights, detectors , phone system etc 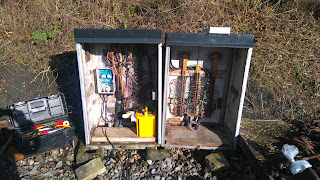 Had to duck out before the end of play for a doctor's appointment , so not sure how far the troughing reached. But there are two more of the team coming in on Wed to help Malcolm  so hopefully another  box will get ticked.