Three of us in today with Malcolm W  in charge. The mission being to replace two "weary" ground signals at Toddington.

The two signals that we took out at Winchcombe have now been fully re-conditioned and these will now have pride of place at Toddington. 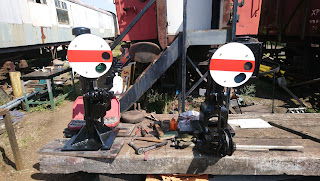 We attacked the easy one first (no 15 out of the parlour road) which was mounted on a sleeper with four coach screws which were fairly easy to remove. So this was a straightforward replacement. But no 16 at the South end of platform 1 was a different kettle of fish. This was mounted on two submerged concrete blocks with bolt heads inside in ballast and clay. So we spent most of the morning on our hands and knees scraping out clay and ballast to be able to get a spanner on. 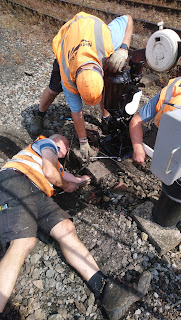 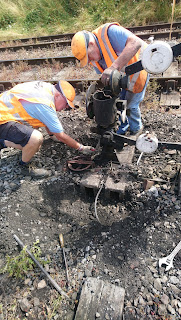 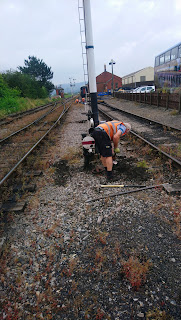 And eventually got the signal off 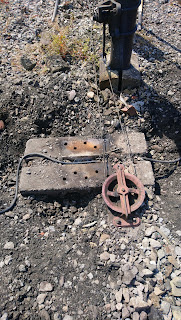 Luckily there was a trolley parked up by the coal store which greatly facilitated moving the signals about - just had to be careful not to walk into the pit while pushing! 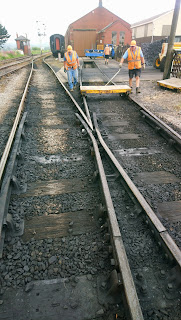 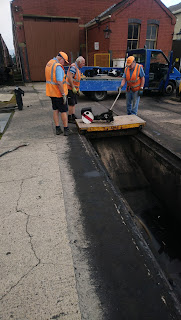 Bact to Winchcombe and made a start on dismantling. Laid out all the parts off the Western Region one ready for cleaning. A lot of congealed grease and muck to be removed. 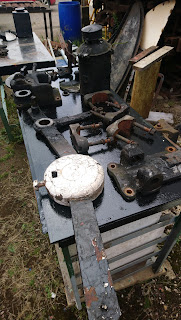 And the balance weight locking bolt is seized solid so removing the weight will be a challenge - a combination of drilling and hammering in prospect!

I took a photo  of Malcolm W with his 40 year presentation medal - two weeks late I'm afraid but here it is. 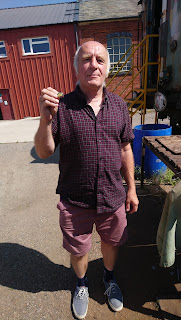