We continued today with the assembly of the replacement CRC bracket signal in Winchcombe yard and a bit more preparatory work with cabling at the viaduct - this to be finished off once the tamping of the replaced track has been completed - this week I think. We hope to re-bond the track over the viaduct next Tuesday - not much time left to get everything up and running now.

So, to the bracket signal. The platform is held onto the main post with two sets of clamping blocks. Two of these blocks have a large "bung" which fit into two diametrically opposite holes in the main post - once all the bolts are tightened this prevents any twisting or axial movement.

In order to fit the post the two halves of the steelwork have to be separated so that once the clamping blocks are bolted in there is clearance for the main post to slide in over the two  "bungs". Here is a view of one of the pairs of clamping blocks - you can see the locating bung in the bottom of the far half: 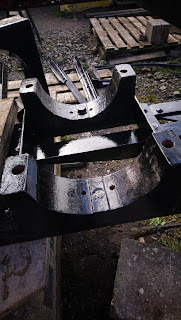 Here are the clamps positioned in the framework 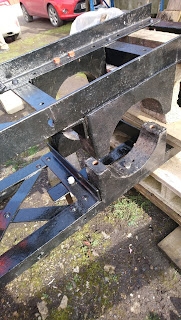 The tele handler was then brought into play to manoeuvre the post into place - quite an unweildly lump particularly as the tele handler can't provide a sideways motion to "inch"  the post into the hole. (unfortunately I didn't get any pictures of our newly qualified driver (Malcolm W) as I had gone off to the viaduct on the cabling jaunt) - but suffice it to say it all went smoothly without any damage to the nearby parked cars! 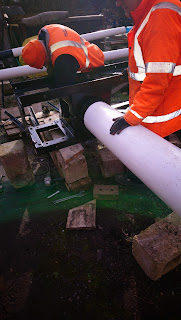 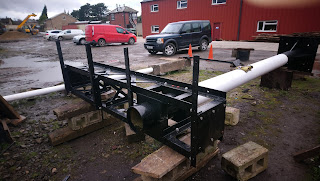 The vertical bars you can see in the above photo have been refitted and will support the boards for the platform which we can now cut to suit.

While all this was going on two of the gang George B and Peter W were assigned a task to replace the tatty labels on the block shelf plungers and repeaters in Winchcombe signal box. Had to come to terms with using some significantly smaller screwdrivers than normal to deal with the small brass screws!
The old : 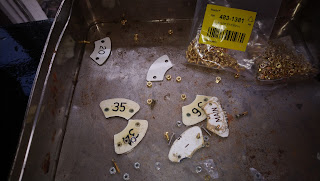 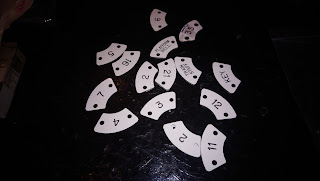 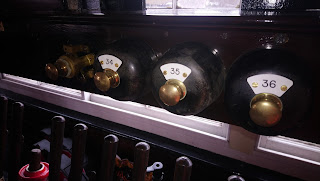 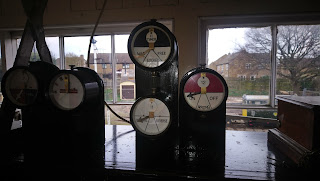 And George wrestling with the screws up his fingernails: 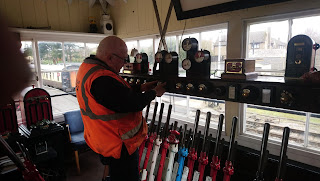 Three of us went up to a point approx 250 yards  north of the viaduct to replace a lineside cabinet that has been damaged during recent workings there and to prepare for the installation of a new 20 pair cable that will run from a new cabinet on the viaduct to this one.
The old cabinet is on the left: 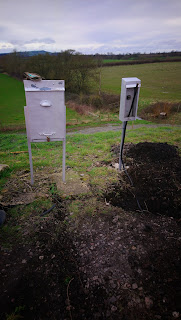 And was wrestled out of the ground by Neil C- a significant lump of concrete attached. We smashed it off and dumped it back at the concrete pile at Staunton. 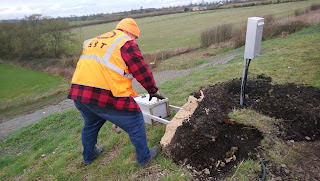 The other cable connecting here feeds the lamp on the adjacent distant signal. A bit of re-burying required by Peter W 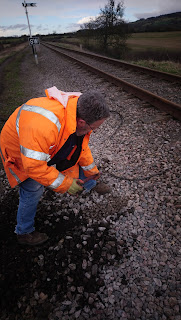 The finished job - just the wiring still to connect up 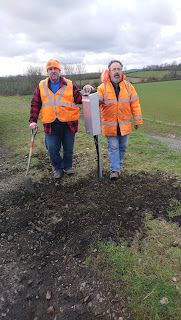 The diesel railcar is being serviced at the moment and has been out of action needing new brake blocks so it cannot be used - we are planning on using it for our work on the viaduct next week to carry our equipment so fingers crossed the spares will arrive and be fitted this week.