Much Work at Broadway

A very good turnout at Broadway with ten of us in action.
Firstly a big push to get all the electrical cables buried.
Steve W has joined us today with a mini digger to produce a shallow trench along platform 2. 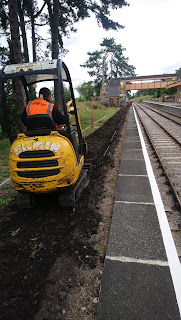 The one 20 pair cable coming southwards towards the signal box is already connected at its northern end in a cabinet, so it is progressively laid in the trench and can then be trimmed to length once inside the box. Luckily the minidigger in Steve's hands can access even the steep bits down to the rear of the box: 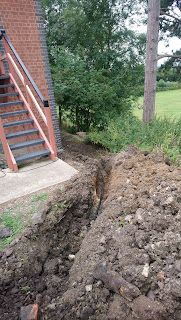 And all hands to the pump to help with the filling in: 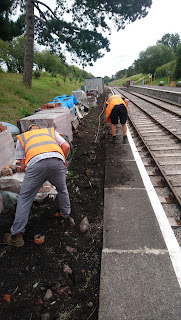 Neil C had already drilled an access hole for the cables to enter the box. There are 4 twenty pair cables here  - 3 coming in from the south and one from the north A bit of rodent proofing will be required here.
So now all cables are buried and out of sight - the 3 coming up from Evesham Road Bridge have been buried behind the back of platform 2.
Excess cable has been sawn off but leaving plenty for making all the connections in the locking room: 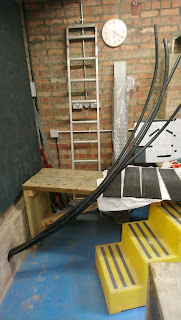 A mounting board for all the connections and electrical equipment has been fixed to the wall on the LH side.
The oil store cabinet is now in position at the back of the box: 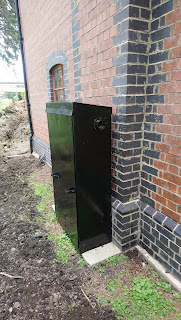 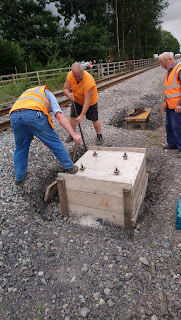 And replacing the surrounding spoil to tidy things up. Peter W giving it a good tamping  - should be a good solid foundation for the signal 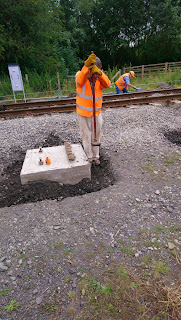 Foremarke Hall gives us an appreciative whistle when passing 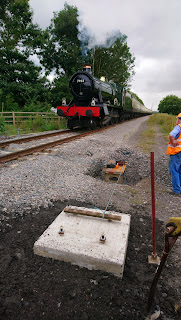 Next is the aligning and fitting of the pulley wheels on the steel plates which will direct the signal wires under the track from the signal  to connect with the wires on the Broadway side. Four wires required here - two for the main arms and two for the call-on arms. First of all we use nylon rope to set the alignment and when happy we fill in and tamp round the concrete blocks which support the steel plates. (after a pause to let P & O go by) 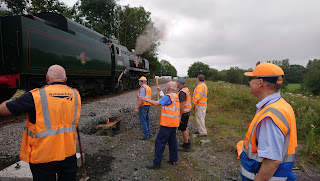 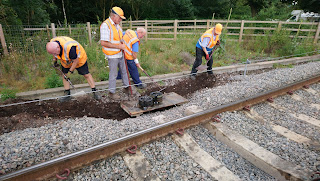 Then to drill the mounting bolt holes in the steel plates - three for each pulley set. Could have done with the mag drill for this but the battery drill managed the 12 holes - had to use the spare battery for the last two.  John P coaxing the drill bit through 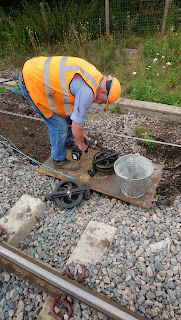 The signal wires that go under the track and round the pulleys have a thimble crimped onto each end for connecting at each end.  Here's one in close up: 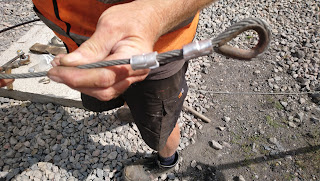 And the large crimping tool used to do it - a two man job without a vice! 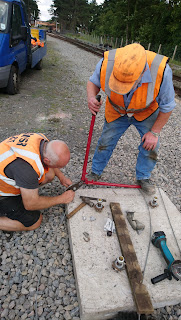 These wires are then threaded round the pulleys and under the track and tied off for the time being. 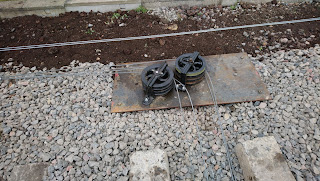 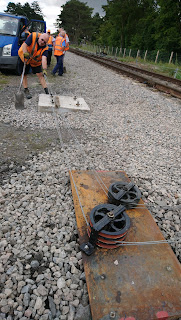 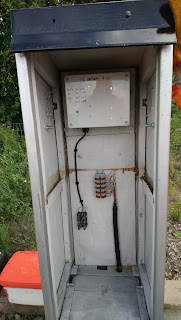 And with the cover on: 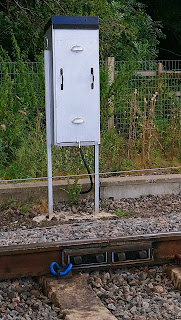 The piece of rail that held the Beware of Trains notice at the South end of platform 2 which we removed until cable burying and cabinet positioning had been completed, has now been reinstated and is here receiving a coat of primer from Peter W 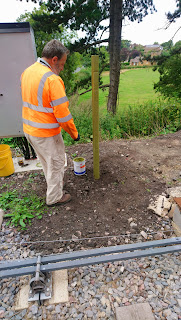 PS. With regard to the questions about the damage to the point blade at Broadway, this is in the hands of the P Way Dept. I believe that the current thinking is that the point be taken out and sent away for repair and to be temporarily replaced with plain rail.
Posted by Curly at 07:54