Only five of us today so off to Toddington for a bit of cable trough laying. Not the best of occupations for a hot day to be humping concrete troughs about but it is a job that has to be done.
Another 75 troughs will complete the cable protection from signal 25 (South of the signal box) to the two sets of recently laid points.
Electrical feed cables for the two point motors will go into these troughs.
A quick picture here of these motors now that they are nearing the end of their re-conditioning - just a bit of internal wiring to complete : 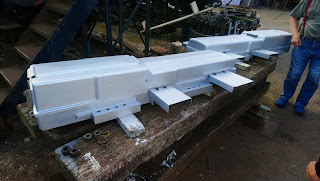 Although some weedkilling activity has taken place this does not seem to have had any effect on the Mare's Tails - so a bit of gardening required before we start: 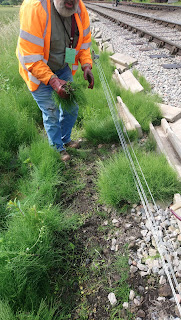 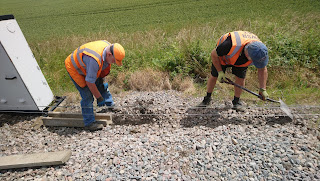 Most of the troughs and lids had been previously dropped off trackside at roughly the positions they are required but still had to be lifted over the signal wires and knocked into position with a bit of packing.
The embankment  falls away quite steeply along here but we managed to complete without major incident: 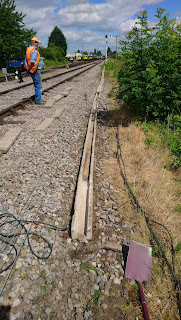 The end of the troughing run as 2807 approached: 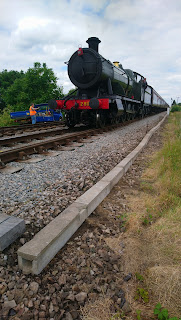 And a closeup of the extended sleepers where a point motor will be bolted. 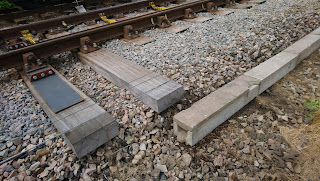 A ground signal is to be installed to control exit from the south headhunt  - nearly opposite from where the troughing ends. So another hole is required to site a concrete pedestal for this. John P gets busy: 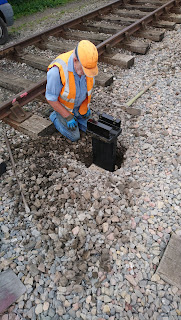 And then lowers in the pedestal. This has a steel bracket bolted on it to take the signal: 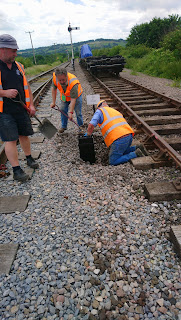 Here we will have a coloured light signal with 3 lamps - and here it is sitting in our coach back at Winchcombe -  lens colours to be sorted yet: 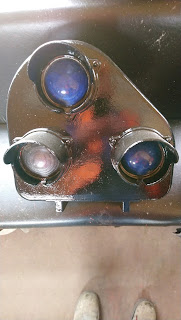 And finally, also back at Winchcombe our Broadway bracket signal has been re-assembled for its final paint titivatiom. The two dolls will be removed again befote it is. transported to Brosdway.
The digging of the hole for its foundation block isn't far away now. 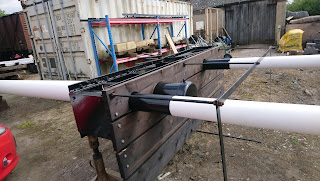