We were off to Broadway today with the diesel railcar trailer loaded withh the fittings for the Broadway home signal and two large line-side boxes - including aggregate, cement and water (and wheelbarrows to mix the concrete on site) .
We split into two groups. John P, Malcolm W and myself were dropped off at the Home Signal with all the fittings while Neil C, Keith L, Jim P and George B carried on up to the bracket signal at the south end of platform 2 to install the first of the two line-side cabinets.

At the site of the home signal there is much evidence of the trenching for the cables. Steve W has already used his JCB to complete a trench from the distant signal to this point 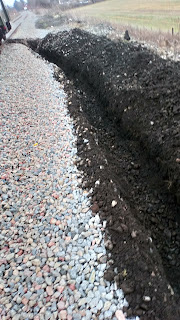 The trench is approx 15" deep so the cable should be well protected for many years to come - it is armoured and grease-filled and not easy to damage.
Steve now carries on to trench on the opposite side of the line up to Childswickham Bridge - completed by mid-afternoon. 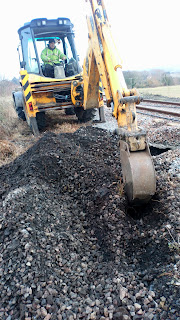 Because trenching on the Cotswold side of the track is impractical from the home signal the main cable has to pass under the track. Feeding hundreds of yards of heavy cable under the rails is pretty impossible so we have asked PWay to break a track joint, unclip a length of rail and jack up the rails sufficiently to feed the cable through. Once this is done all the cables along his stretch can be dropped in and the trench back-filled.
So, on with the assembly of the home signal. We start at the top with the finial. Most of this is a two-man job with one holding and one bolting. The top half of the bracket which holds the pivot for the spectacle plate also holds the detector unit and is very heavy to hold in place - at least Malcolm was grunting a bit until I got the clamping bolts tightened! ! 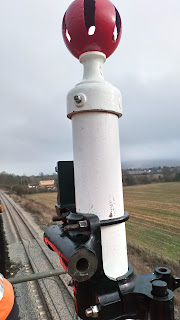 There was quite a stiff breeze blowing and we felt it on the top of the scaffolding - difficult to manipulate nuts and bolts with gloves on so the hand-chill set in, but we managed not to drop any. We had John P down below feeding us with parts using a rope and pulley attached to the scaffolding.
With the castings secure the spectacle plate and signal arm (a brand new one) were attached: 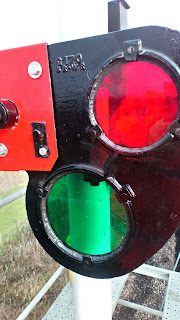 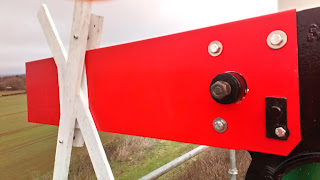 And the not-in-use cross attached.
Six feet below we repeated attaching the fittings for the "Fixed Distant" arm. Note that this is the first combination signal we have on the GWSR. 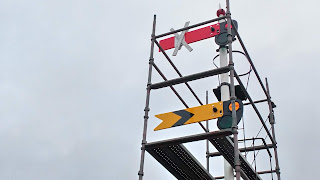 A ladder and two crow's nests were then wrestled into place: 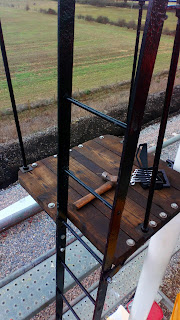 Then we moved down to ground level to fit the balance weight assembly and angle crank: 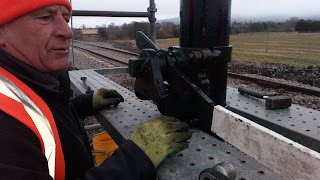 Luckily the scaffolding plate was at exactly the right height to take the weight while it was clamped to the post with two hoops.
The remaining piece of the jigsaw is the down rod which connects the spectacle plate to the balance weight arm for operation. This has to be made to suit the distance between the two so a measurement was taken of 19' 6". This rod will probably consist of two pieces which will be welded together. Each piece with the appropriate fitting on the end. A job for back at base.

Up the track at Broadway the next line-side cabinet has been sited and concreted in position by the bracket signal (this photo courtesy of Neil C) : 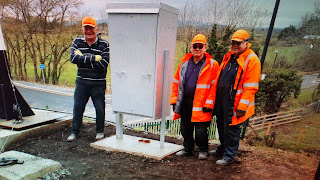 Then back to the home signal for the second cabinet. This is adjacent to the signal and here is a view of the foundation being prepared from the top of the scaffolding. Note the concreting kit on the trailer: 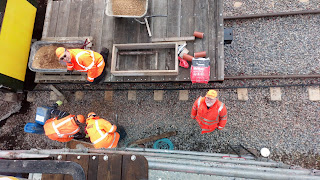 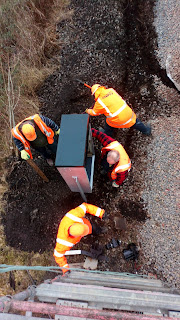 And the finished job with the shuttered concrete base. The top of the orange pipe protruding from the concrete has a 90 degree bend which is proving a very efficient way of feeding the stiff cables from the trench up into the cabinet 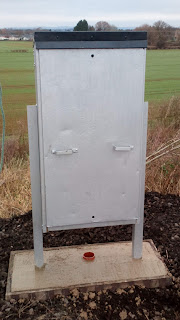 And on the way back another view from the railcar  of the trenching south from the home signal. 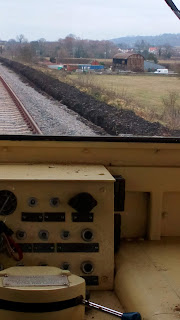