Today's efforts at Broadway spent in doing work to fill in the gaps in the barrow crossing at the south end of the platforms.
We arrived with the blue pickup loaded with a fresh heap of aggregate which needed barrowing from the station entrance gate to a pile by the wooden signal post where we will do the concrete mixing. About  20 barrow loads later with 3 of us marching up and down: 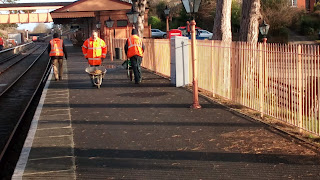 We achieved a reasonable pile which should be enough for a day's concreting: 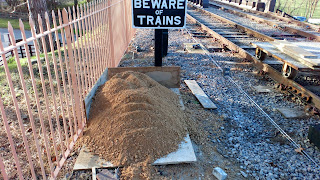 Just as we finished this we heard the unmistakable "roar" of the diesel railcar pulling into the station (slowly) un-reeling a 20 pair cable between the rails platform 2 side (this shows our newly fabricated reel holder in action).
Neil C had just reeled out the major part of this drum between Little Buckland and the distant signal ready for burying.
Calculations worked out fine because there was just enough cable remaining to complete the two runs required between the signal box and a cabinet to be installed adjacent to the existing bracket signal. 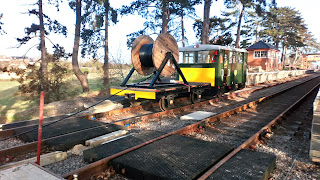 Having the railcar trailer here was the ideal opportunity to remove the pile of cable troughs to clear space for the line-side cabinet. You can see here where the cable has been manhandled  into rough position to be buried: 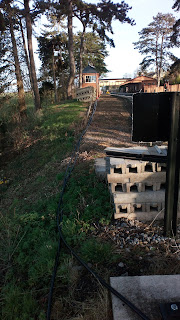 And the troughs loaded up for despatch to Winchcombe. 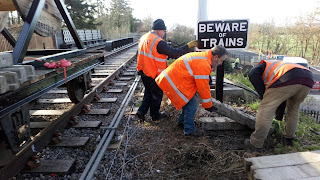 (There's a few more hundred still need moving from up near the signal box when we have an idle moment! ) 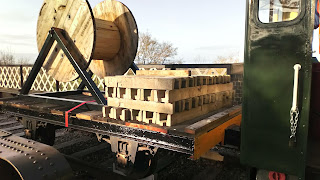 Anyway, I digress from the main event. Preparations made for a concrete pour with some scaffold board shuttering in the gap between the rubber pads in the six foot and a bit of rubble to eke out the concrete: 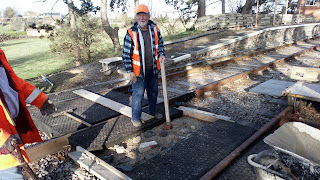 Here is the finished pad which was eventually levelled out after much tamping : 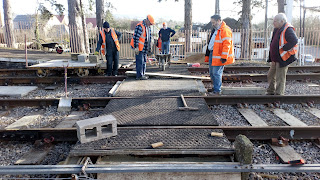 In the foreground of this shot you can just see part of the concrete channel we are preparing for the rodding and signal wires to pass through - this is essentially the same arrangement as that at the northern crossing - with a steel plate to be fitted over the top.

And a close-up of the pad prior to a bit of tidying up: 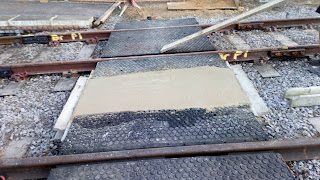 I sloped off to walk up to the Advanced Starter signal up nr Childswickham Bridge where some further work had been carried out last week. A scaffold tower had been erected  to facilitate the mounting of the upper fittings: 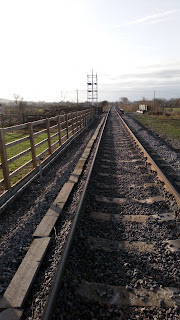 And the counter-balance weight arm and pulleys have been fitted: 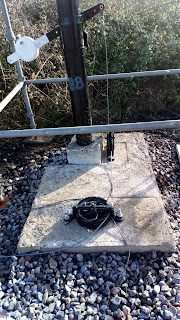 And finally, the railcar off back to Winchcombe with George B keeping us all clear of the tracks! 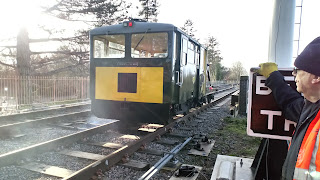