Four of us sweating away at Broadway today.
A full load on the pickup readied for the days work, including a sizeable load of aggregate , the no. 14 dummy signal (under the barrow), and a few more lengths of rodding. 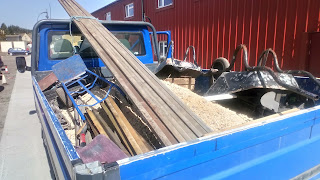 Not the best of days to transfer the aggregate by barrow to the top end of platform 2, but here's Carl S making a start: 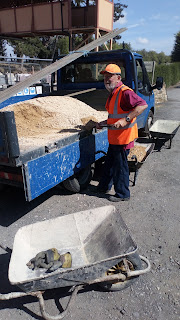 Just as Steve appeared with the mini-digger to start excavating for the compensator positions: 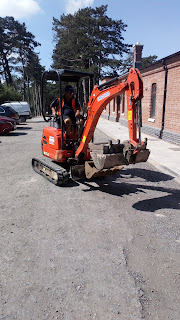 Making a start with the first of two holes. To ensure that the compensators are well anchored we need a significant concrete block: 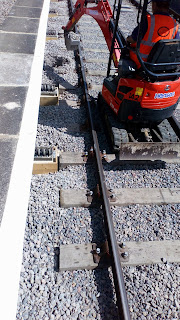 Then to assemble a 3-sided shuttering box : 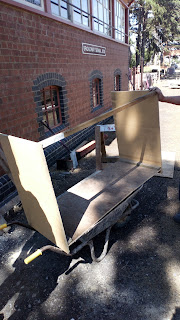 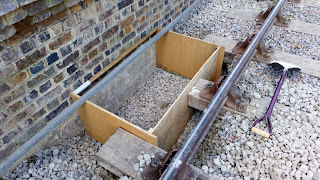 Note that we had to lop off the end of one sleeper to fit this in.

Sweat of the day award, however, must go to Neil C who has made a start in clearing the concrete cable troughs off platform 2. He has pulled the bogey flats out of the Broadway North siding into the station with the Class 37 to do this. 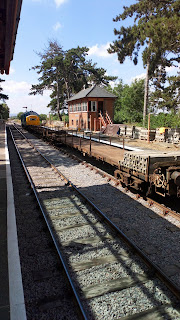 Here he is in action. Didn't get an end of day shot of the total load but he must have shifted about 60 troughs and lids all on his own - we were too busy to help!!
These will eventually be transported south of the station to be unloaded along the fence adjacent to the caravan site and up to Childswickham bridge 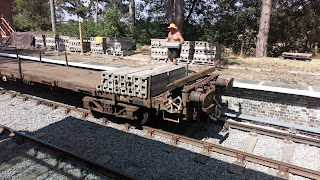 The final act of the day was to fit the ground signal onto its freshly cast base in the 6ft between the siding and headhunt. I got a ride in the 37's cab to get a shot of it on the way back from parking the troughs back in the siding. The signal will have its disc fitted later: 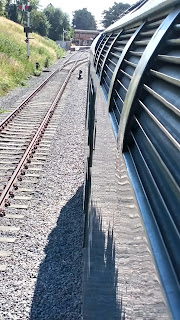 And a closer view with the shuttering removed  looking back towards the station. Another concrete block will be needed just south of the signal to fit an angle crank which will guide a signal wire to the right under the rails. 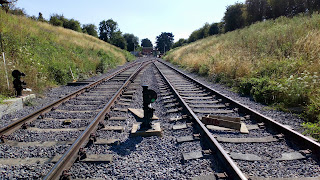 The usual Tuesday gang will be in tomorrow and one of their tasks is to angle off the end of platform 2 ramp to allow us to continue with rodding stool installation.