Seven of us kicked off at Winchcombe today with various tasks allocated.
Richard C, John P and Len went off to Gotherington to replace a rotted plank on the foot crossing from the signal box. Here's the before : 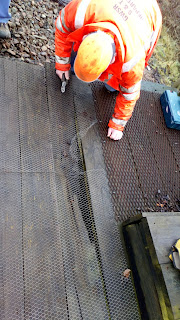 This wooden planked crossing is covered in chicken wire which is held down with copious numbers of staples. These had to be removed before we can insert a new plank. They prove to be a bit of a challenge to prise out. Some of them are well hammered in and require some serious attention!
Anyway, patience is rewarded and our pre-prepared plank is inserted and screwed down with the chicken wire re-stapled. 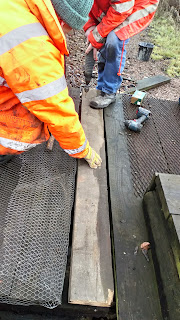 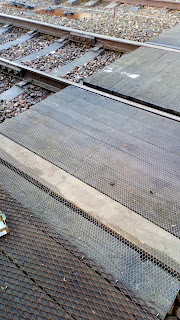 Then back to Winchcombe to install the new coach battery charging connection between the tracks at the Cheltenham end of the station. This will connect to the armoured mains cable that we put in a couple of weeks ago. Keith L on the shovel (our experienced ballast technician!) 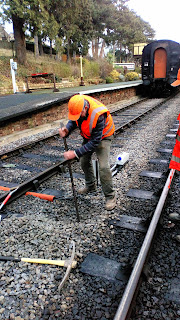 and Paul making sure we're in the middle and vertical: 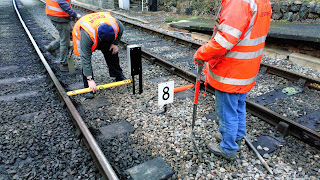 It has a barrow load of concrete under the ballast to secure it so it should withstand a bit of  manhandling.
The number 8 marker denotes the stopping point for an 8-coach train.

And so to a bit more woodwork. The last remaining signal we have to install at Broadway North is a ground signal to be positioned in the 6ft between the headhunt and Siding. This will be mounted on a concrete block for which we need some shuttering and a template to position four securing studs in the concrete.
So step forward the carpenters: 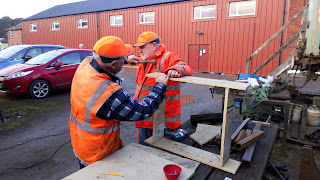 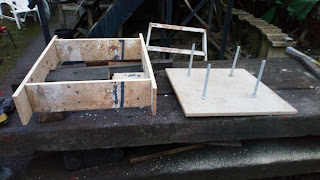 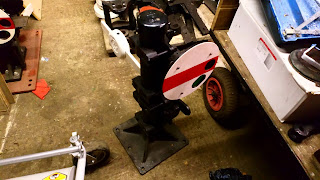 Meanwhile Len has been beavering away cutting up lengths of  M12 screwed rod which will be attached to the bases of the fabricated rodding stools. This will help secure them 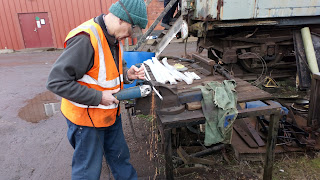 in a concrete base in the ballast.

And finally, may I introduce the S&T entrant for the 2018 Turner Art Prize: 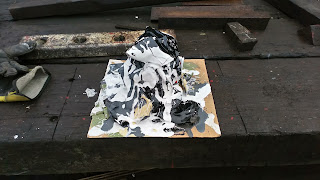 A compilation of hardened paint skins entitled "A Study in Black and White"
Other suggestions for a suitable title will be considered!
Should this be nominated I will airbrush out the background!

May I, on behalf of the S&T dept.,  wish all our blog readers a very Merry Christmas.